This blog is for reference from the 2021 growing season only - not all links may work.

Threshing of all planted grains is finished...some spring planted left to do, but, that can happen in November when life slows down.

Last of the primary Tartary Buckwheat was cut.   Been harvesting for about 3 weeks, whenever I see stalks getting to the point that the leaves are turning and the seeds looking finished.    Same with the Multi-Hue Quinoa, cut the straggly remains.   I want to plant fall grains in this plot, so I needed to 'move them along'. 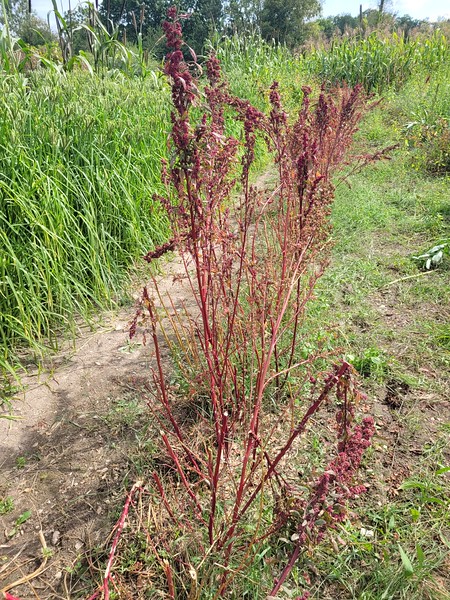 Blue sky, light breeze to keep the mosquitos at bay, my kind of day! Sun Ray Wheat reminds me of a bug! Liberty Hull-less Oats (O10) are finished.  Had significant lodging year, however, a creeper weed was trying to pull them down, and, looks like I forgot to thin them to my regular spacing... oops.

Almost forgot my large plot of Sumire Mochi Barley (B06). We had over 2 inches of rain yesterday... would have been better to cut it before the rain.

Finished the edges of the spring planted Sardinian Barley (B27). Did some cutting before a storm with thunder and lightening came from the North! First of the oats were cut today. Notice, oats are cut before the stems are quite as 'brown and ripe' as wheat or barley would be.  If you wait too long, the oats fall out of the hulls and become bird food.

Fimbul Barley (B86)  Last fall we made a large effort to plant a large number of malting, feed and hull-less barley cultivars to see how they handle our winters. A beautiful sunny and hot day, perfect for cutting grain! Finished the Bere Barley in the rain.  The plot is 7.5 ft wide (9 rows) and 45 feet long.   I am quite interested to know the yield after threshing later this fall as time permits.  Grains to be planted in the fall get first priority.

Cut about half of the Bere Barley (B08).  This is the first spring planted barley of the season. While the plants were small, I was able to keep the plot weed free.  Once that began to tiller, I stopped weeding.  The result came out as I desired: Barley standing proud over a cover crop of natural 'weeds' which will be mowed after the grain harvested. Butler Barley (SRW24) is quite beautiful with its large awns.

Maris Wigeon Wheat (W54) has such large, stiff stems which is why it was historically used for thatching.

Get started on the Danko Rye (R04) Half of the Dutchess Barley (B84), if I would have waited another day or two, I'd cut it all at once, but, to hedge my bets against the endless rain... I took half.

Finished the Black Russian Barley (B89)

This beautiful barley suffered heavy lodging. I had no problem harvesting by hand. Since not every plant lodged, I will try increasing the spacing. It had extremely robust tilling. Each plant had an amazing number of tillers like this: Several years of selecting for survival, strong plants and performance have begun to pay off.  This year, the Fall Planted Sardinian appears to be able to out yield the spring planted. Today, I only harvested about 2% of the crop, selecting only the most ripe. The rest needs a few more days. Finally, after what seemed like endless rain, I can begin harvesting again.

Black Russian Barley (B78) has amazing coloration.  It would make a fine decoration. Schuyler Barley (B93) did very well.  Being tall, it stood over the weeds and ground cover. Pike Barley (B91) This six-row awned Barley developed in Indiana is useful for double cropping with soybeans.  I am thinking the timing is also appropriate for Gaspé Flint Corn as well. Michigan Winter Barley (B89) Developed in 1914 at Michigan State by Frank A. Sprague, this 6-rowed barley has a 15.5% protein content. All of these barley varieties are 6-row, however, I also found 1 plant of 2-row barley as a rogue!    I will grow it out!